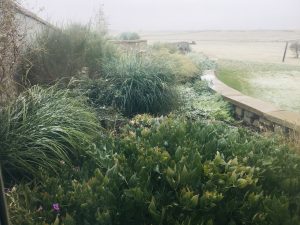 Beauty in Diversity: My mom has commented many times about the fact that there are so many different shads of green in nature. It’s true. Even though our perennial flowerbeds took a bit of a beating in a June hailstorm and many of the plants only blossomed a bit (if at all) the glorious green thrived. And just like Mom said, our garden too is diverse in the shades or nuances of green it has.

Nuances/Subtleties: According to the online Merriam Webster dictionary, nuance means, “a subtle distinction or variation.” Like in all of the colors in a garden, the nuances or subtleties in a person’s voice are what makes everyone’s voice unique. All of our natural vocal qualities are diverse and wonderful. Timbre, resonance, intonation, inflection, pitch and more are distinct in everyone’s voice. Some people may sound “nearly” the same when they speak, but if you really listen there are some variations or nuances that make each and every person’s voice different.

Nuances in Voice Acting: When hiring for a voiceover project you may have an idea of what you want your project to sound like. Whether it be a commercial, a voiceover for a promo, film, corporate narration, or eLearning project, there is likely some “type” of voice or characteristics of a voice that you are looking for. Or for some, “you’ll know it when you hear it.” This of course is where the auditions come in. Having a portion of your project’s script ready for the voice actor to record for your audition will give a better idea of how their voice, the nuances of their voice, and how the script will be read/performed, will pair with your specific project.

Nuances in My Voice: People often ask if I voice cartoon characters or animations. These are definitely two very popular genres in the voiceover industry, but they are not generally genres that I specifically work in.

Mostly when I voice projects it’s me being me, with nuances of me/my voice. Professional, friendly, authority, woman next door, serious, with some “sass”, intelligent, confident, you get the idea…how I read/perform your project’s script is based on the script itself, who will hear the audio (who your audience is), and your direction. For example, for an eLearning project the pace, vocal placement, and pitch would be different for a module teaching English than it would be for a technical medical piece. In the former, I would slow down the read a bit as those listening to it would likely not be native English speakers. For the latter, I would likely approach the script with a more professional tone (but also friendly) and would speak a bit faster than I would with the English-teaching modules.

It’s these small, but important, variations and nuances that professional voice actors are able to enfold into your message/script/project to help make your project truly unique.

Play
Stop
Next»
«Prev
HIDE PLAYLIST
X
WORK WITH ME